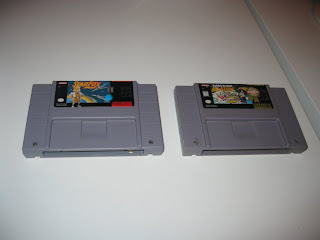 This collection's starting to get somewhere.
At $4.99 each, Goodwill charges too much for some games, and waaaay too little for others.  These are the latter case.

These, however, appeal less to the collector in me than the child in me - these are another two games I never owned but always wanted.  Of course, it always helps that they're worth around 3 times what I paid for them, especially when it comes to convincing my wife I needed to buy them.

Sadly, while the Star Fox cartridge is clean and near perfect, the Super Mario All-Stars is far from it.  The label is torn and the cartridge is nasty, but cleanable.  This cartridge also suffers from a collector's pet peeve - someone's written their name on it in permanent marker. 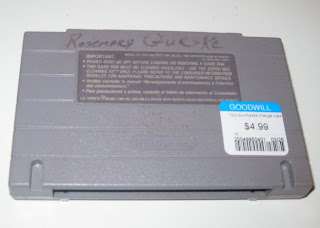 Curse you, Rosemary Gurske!
We'll see how the cleanup goes.

Email ThisBlogThis!Share to TwitterShare to FacebookShare to Pinterest
Labels: SNES 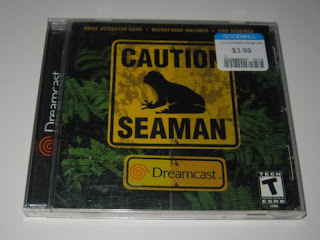 I'll give you a minute to laugh at the title.
Seaman is one of the strangest and most interesting titles the Dreamcast ever had.  It's a take on the "virtual pet" genre, only the pet you're taking care of is a talking fish with the face of a man.  Creepy?  Absolutely.
When I found this game hiding in the audio CD bin at Goodwill, my initial reaction was to leave it behind.  After all, it requires the Dreamcast microphone, which generally goes for about $25 by itself.  A copy of Seaman with the mic generally runs from $30-40.  It'd still be a deal, but I'm a cheap-ass collector.
When I found it, still in the CD bin on a color tag sale day ($2!), I gave in and took it home.
So began the quest to find a cheap microphone.  Ebay and Amazon yielded the expected prices, and nothing popped up on Craigslist.  Before I got the chance to check into any local game stores, I remembered that Seaman wasn't the only game that released with the Dreamcast microphone. 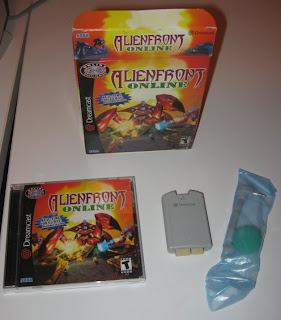 Alien Front Online - it's cheap and fun.
The above copy of Alien Front Online, complete and boxed, came from a seller on Amazon.com.  $7.98 shipped.
Apparently, even though it's a great game and includes a hard-to-find peripheral for a system that's slowly sinking into obscurity, these are dirt cheap.  As of this posting, a factory sealed copy of this game is only $13 on Amazon.  Personally, I recommend striking while the iron is hot if you're a Dreamcast collector in need of a mic.
Posted by Jerry at 7:33 AM No comments:

It's been a month of real life - we bought ourselves a new place, moved in, tore down cabinets and installed new fixtures, painted, installed appliances, and so on.  You get the idea.  Who would want to read a blog about that when there are video games I haven't talked about yet?

A nice advantage of home ownership is that I now have a shed with a workbench - this'll give me a nice place to do repairs with enough space to move around.  That'll definitely be a nice change of pace.

Since the last post, I've also acquired a few new toys, one of which will allow me to capture video of these old consoles.  Video reviews?  Yep, that's the plan.

Back to business as usual.
Posted by Jerry at 7:28 AM No comments: