So, your Sega Master System won't turn on. It worked last time you tried it, but now it just stares blankly when you press the power button.

You plugged in a Nintendo AC adapter, didn't you? Don't worry about it. Everyone has done it - not necessarily with this system, but with something.


But the important thing is, yes, you've fried your SMS. And now, we're going to fix it.

First things first though, a bit of boring technical info. The reason it's broken is pretty simple, really. AC adapters are appropriately named - they're meant to convert AC power into DC power that your device can use. In most cases, such as Sega's adapters, that's exactly what they do.

Not so, in Nintendo's case. Nintendo's wall warts actually feed the system AC power which wreaks havoc on your poor DC device. Generally, the first and last thing to get fried in the Master System is the voltage regulator.

So, in order to fix it, you're going to need a soldering iron, solder, a desoldering braid, and a phillips screwdriver.  Also, you'll need to buy a new voltage regulator, a +5V Fixed-Voltage Regulator 7805, which is available at Radio Shack. Who knew Radio Shack still sells components? I thought they only sold cellular phones these days. 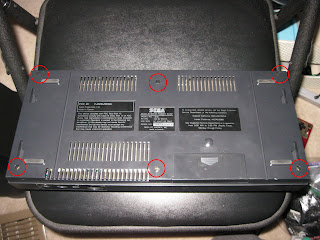 Remove the six screws holding the case together, highlighted above. No hidden screws, these are all you'll need. 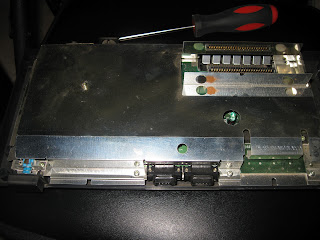 More screws on the RF shielding.


Now the RF shielding - six more screws here.  Three in front, one on top, and two in the back. Again, they're all pretty easy to find. 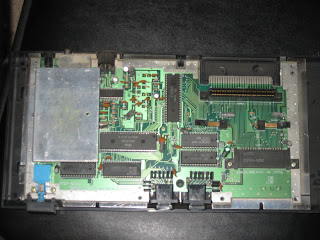 Now to get that board off.


Here's some more. Two around the power switch, one dead in the middle of the board, and two around each cartridge slot. The board should now lift away from the bottom of the case. 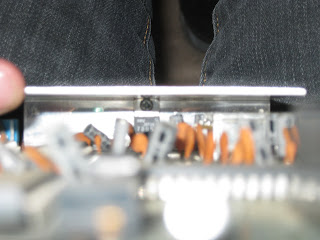 This screw is the bane of my existence.


This photograph was almost as hard to get as that screw was to get out. As you can see, there's a piece of metal screwed to the board - this is the heat sink for the voltage regulator. See that screw? You'll need to squeeze your screwdriver around the components on the board to take that screw out from inside the heat sink. Go ahead, I'll wait. 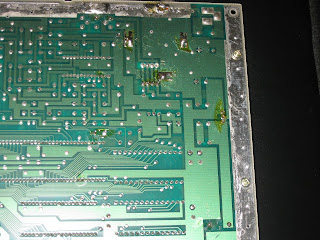 Now that you're thoroughly irritated, remove the heat sink by taking out the two screws under the board. 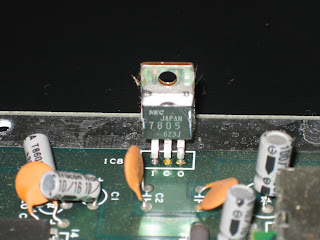 
Now, your voltage regulator is free! 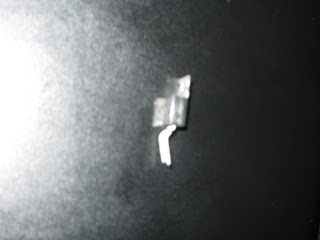 Fuzzy, but you get the idea.


As you can see, the original voltage regulator is bent slightly so it can be attached to the heat sink.  Bend yours in the same way. It doesn't have to be perfect, but it should bend easily.

Sorry, I have no pictures of the next steps as I don't have enough hands to hold the camera while holding a soldering iron.  There are a million soldering tutorials on YouTube and across the internet, so if you need assistance, please refer to one of them.

You don't want to do it the other way.  Think of what a pain it was getting it out - imagine that in reverse.

So, get the heat sink back on and hook it up. 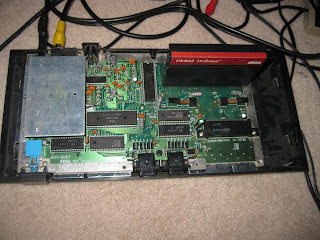 
The power LED should light up, and you're back in business! 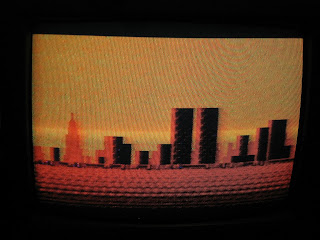 Poor city. But at least my Master System is working!


Follow the steps in reverse, as always, to reassemble the system.  This may not work on every system, so if you're still having trouble, use a multimeter to check where the issue might be.  If it did work, have fun! I know I will.
Posted by Jerry at 10:41 PM