Famicom Games, A Sega Master System And The Weakest Thrift Trip Yet

So, in response to a Craigslist ad, I took a trip out a bit farther out of the way than I usually go, and picked up an awesome deal.  I'll come back to that.

While I was out, I also took a run to my usual day-trip thrift shops.

I've had a sort of unspoken superstition for a while. In every playlist I make before I head out, I sneak in Sievert's Party Dog, the song I use as the theme for my videos. If the song plays at random during the trip, it'll be a good trip.  Well, today I proved there's some merit to that - the song didn't play before I reached my first shop.

No matter how many stores I went to, it was the same. Common games or no games at all. Every single place, nothing. No consoles, no accessories, and no games.

I even stopped at The Bins (the Goodwill Outlet store) and picked through everything they had.  Nothing.  Nothing at all.  Finally, just as I was about to leave and call the whole trip a bust, I found this hiding in the display case. 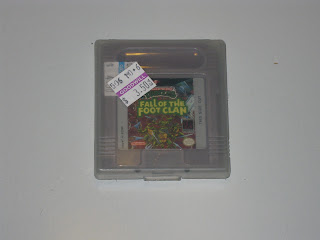 My favorite Game Boy game, when I was very young. Also I didn't have a Game Boy.

Yes, it generally goes for about 50 cents less than I paid, but damn it, I conquered the stores tonight. I found something, and therefore I won. So there.

I'm kidding, of course. I love taking these trips, even if I find nothing at all. There's a thrill in the hunt; digging through the trash and finding the hidden treasures.

Next, I received an awesome package from Japan.  4 Famicom games for $26 shipped, from Sean at http://famicomblog.blogspot.com.  None of the markup you usually get on these games... seriously, check eBay.  Anyway: 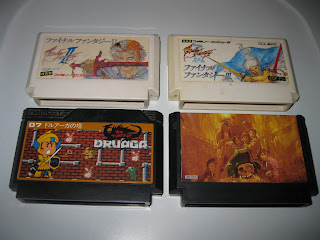 The games are Final Fantasy II, Final Fantasy III, Tower of Druaga and The Goonies. You can't beat $26 for these games, when you figure how much you're usually charged just for shipping from Japan.

So, on to the big Craigslist score, and the reason for the trip out today.  The listing was for a Sega Master System, several controllers, and some games.  He said he couldn't get it to start up but didn't have the correct AC adapter, so I figured I'd give it a shot, since I've got two of them.  Fired it up when I got it home... and it does not start up.

EDIT: A small update - I've found out the original owner tried to start it up with an NES AC adapter, which is a very, very bad idea. The NES adapter puts out AC and is converted internally, whereas the SMS adapter converts to DC. Plugging in an NES adapter will fry your Master System. Just don't do it. I know it fits, but that doesn't mean it works. If you have a Sega Genesis Model 1 AC adapter, that'll work just fine. 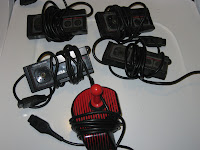 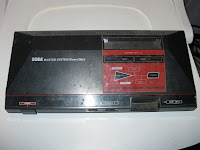 One of the controllers is an Epyx joystick, which makes me smile.

The games are the reason I went for it, though.  Well, one, in particular: 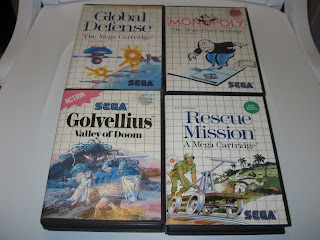 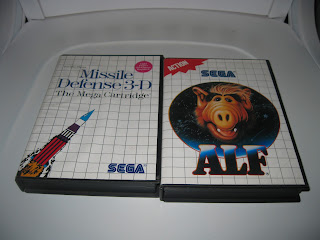 Global Defense, Monopoly, Golvellius, Rescue Mission, Missile Defense 3-D and Alf.  Believe it or not, Alf is a very rare and difficult to find game, netting around $40 boxed.

How much did I pay for the whole set?  $25. Even with a non-working Master System, I still win the day.

Yard sale season starts up again soon, though. Get ready, I've got a feeling this year's going to be a great one.
Posted by Jerry at 9:41 PM