Nintendo's Famicom was a superior design to the NES in a number of ways, though inferior in others.  The biggest difference between the two is the disappearance of two pins in the cartridge connector which allowed the cartridge to carry additional audio hardware. This meant that developers could extend the existing sound with additional channels or even - in the case of Lagrange Point - add FM sound synthesis on par with the sound hardware in the Genesis.

For someone who grew up with the NES, the sound is mind-blowing. After all, our games couldn't do that - just look at the American version of Castlevania 3. The music was remixed as well as it could be for the hardware available in the NES, but it doesn't hold a candle to the Japanese release.

So, you've got a Famicom, and an NES PowerPak  Well, you'll be happy to know that the PowerPak is able to reproduce those additional sound channels, but it'll take a small amount of work on your part.

Credit where credit is due: This is Drakon's method from this forum post, and it works beautifully.

First, you'll need one of these cheap NES to Famicom adapters. This is the one I use, at $10. Don't get ripped off.  Also, you'll need two 10k, 1/8 watt resistors.  You can get these at Radio Shack fairly cheaply. 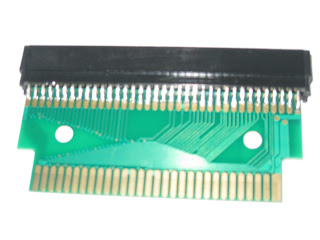 Cheap enough to risk destroying, but be careful anyway.

You'll want to flip the adapter over to the back, as shown.  Do you see the two sets of pins that are bridged? You'll want to cut the bridge between the set on the right. 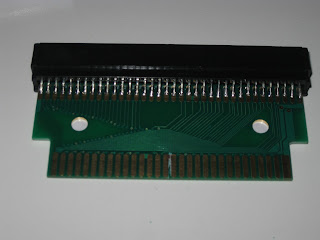 Use a multimeter to verify there's no continuity between the two pins. You'll want to be sure.

From here, you'll want to solder a resistor between the left pin that you just cut free, and the NES pin directly above it. Then, below the resistor, solder another resistor leading to the pin on the right, as shown below. 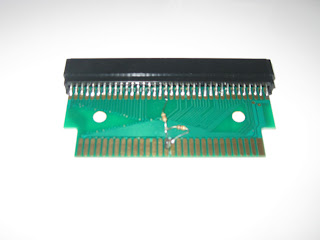 I apologize for both the crappy picture and the terrible solder job.  Tip: Don't be in a hurry.

EDIT:  I forgot to mention, as well, even with this mod, your other NES games will still work as normal in your Famicom.

That's all you need to do! Try out any supported game with extra sound channels and enjoy!
Posted by Jerry at 4:46 PM