I've just gotten back a couple of days ago from a trip to visit my family in Iowa for Thanksgiving.  I had a great time, but this isn't a blog about family, so let's talk games.

One of the things I like to stress here is that no matter where you are, you can hunt this stuff down.  I've visited tons of thrift stores and have always, always been able to find some gems... or at least some cheap junk.

In the Cedar Rapids/Marion area, however, I hit up 5 different thrift stores and found almost nothing.  One consignment store had an enormous selection of crappy sports games for at least 5 times their current value, but the rest were completely devoid of anything game-related.

Now, this may have been because I went thrifting shortly after Black Friday, but classic games aren't really a big ticket Christmas item... who knows.

So, thrift stores may not be the way to go, where you are. 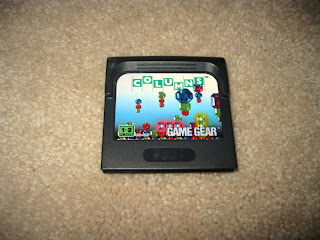 So, of course, I visited my local Goodwill upon returning home to wash that bad taste out of my mouth.  I left with a copy of Columns for the Game Gear, with a 1/2 off tag at $1.49.  That made me feel better.

That's not to say that the trip was not profitable from a classic gaming standpoint.  Firstly, my brother-in-law's mother found a stack of Genesis games in their storage.  He no longer has a Genesis, so they gave me this: 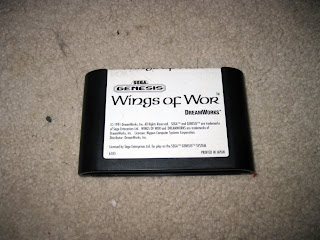 Wings of Wor for the Sega Genesis.  Next, I raided my parents' basement to retrieve the goodies within, as well as the games they had bought from me back when we needed the financial help.  What follows is a significant portion of my childhood games. 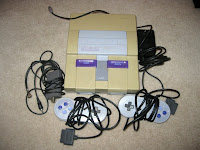 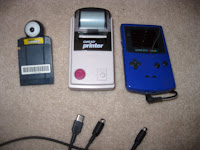 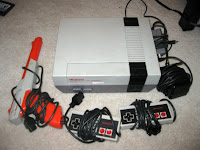 Oh yeah, this is the good stuff, right here.  The NES Action Set I was given for Christmas in one of the best Christmases ever, the badly yellowed SNES which was the first thing I ever bought with my own money, and the Game Boy Color/Camera/Printer I purchased in high school. 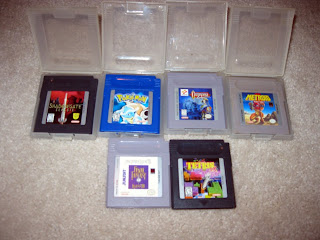 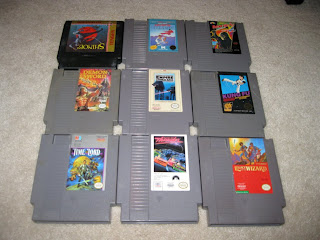 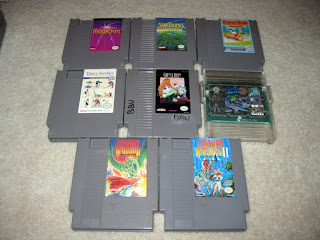 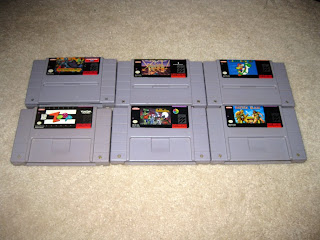 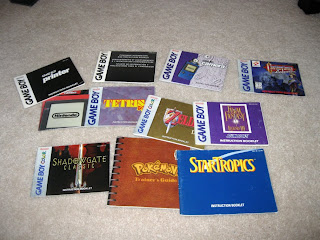 A stack of manuals, mostly for the Game Boy stuff.  Looks like I've got a StarTropics manual, too.  No letter, of course.  I doubt I'll ever find a copy with the letter intact. 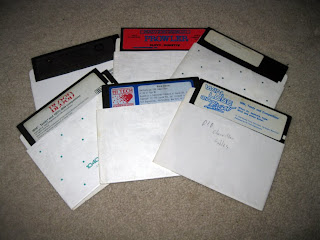 Here's something I tend to forget when dealing with retro games - PC games!  Here we have Avoid The Noid, the freeware game Sleuth, Captain Blood, Megaman, and Win, Lose or Draw.  Also, a copy of Prowler that's a hybrid PC/Commodore 64 disk.  Score! 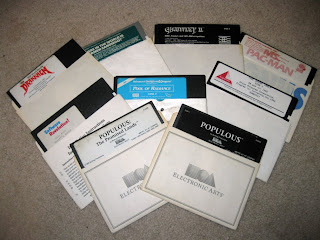 Lastly, we have Drakkhen, Where in the World Is Carmen Sandiego (a demo, I think), Gauntlet II, Ms. Pac-Man, Moraff's World, Pool of Radiance, The Dark Half, Populous and Populous: The Promised Lands.

With so many PC games, maybe we'll look at doing some DOSBox reviews.  I've also got a nice stack of CD-ROM-era PC games I'd love to tear into again... we'll see.
Posted by Jerry at 6:53 AM