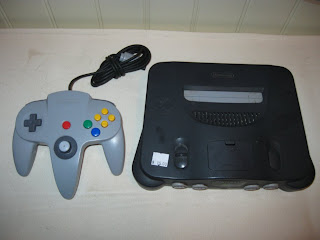 The glaring missing piece in my Nintendo collection, mine at last.
By the time the Nintendo 64 released, I had completely switched focus from Nintendo consoles to Sony, so I missed out on some of the best titles of the era.  The Playstation was loaded with triple-A titles, to be sure, but you'll always pine for the ones you missed out on - hence my recent obsession with Sega's consoles.

This one - though the price tag says otherwise - was purchased at the Portland Retro Gaming Expo for $10.  Something to remember - if you ever find yourself at an expo, convention or trade show and want something relatively common, wait until the last 5 minutes and make a very low offer.  They may haggle the price back up, but they'll almost always agree to knock the price down.  By that point, they're less concerned with the profits and more concerned with hauling all of their merchandise back home.  If it's super-rare and you want it, you're better off snapping it up early before someone else does.

On another note, I haven't been posting much as of late - my wife and I are in the process of moving, but I do have additional finds to talk about/brag about.  Stay tuned!