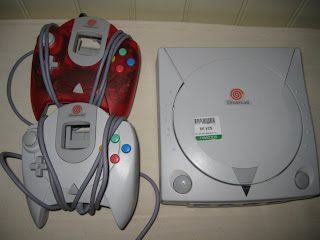 I've missed you so, little grey box.
Was it piracy that killed the Sega Dreamcast?  Was it the result of a number of terrible decisions on Sega's part?  That argument may go on unresolved forever, but the fact remains that the Dreamcast was home to a serious number of instant classics; far more than you'd think, considering its lifespan.  As it was a home version of the popular Naomi arcade hardware, it just made sense for arcade developers to release their home versions here - which is why several games appeared for the Dreamcast after it was pronounced dead by Sega.

The Dreamcast holds a great - though short - chapter in video game history, which is why I was sad to let mine go back when I needed to sell everything.

at Amazon.com
Posted by Jerry at 6:00 AM