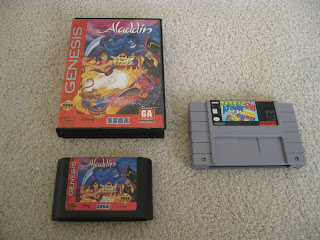 I love Panel De Pon so much.  You have no idea.
Aladdin

needs little introduction - a game based on the Disney film and developed by Virgin Interactive.  This is a completely different game from the SNES version, which was developed by Capcom.  I've always been biased toward this version, but my wife insists that the SNES version is superior - so I'll most likely be doing a full comparison/review of these games once I've got a copy of the other versions.

was the first US release from the Panel de Pon series of games.  Panel de Pon, filled with flowers, pixies and tooth decay, was likely thought to be unfit for the American market, so they instead rebranded the game with characters from Yoshi's Island.  The game was very well received, and was actually brought back to the Japanese market as Yoshi no Panepon for the Satellaview service.

Despite being called 'Tetris', the game has absolutely nothing to do with the Tetris series, and The Tetris Company has actually stated that they regret giving Nintendo permission to use the name.

Today's pickups come courtesy of Google Offers, which is currently in testing in the Portland area, and has been a great resource for me so far.

The deal: $20 worth of credit at a local classic game store for $10.  Needless to say I jumped before I'd even ever visited the store.  Sadly, though, the prices were pretty high, as is typical for a mall-based used game shop.