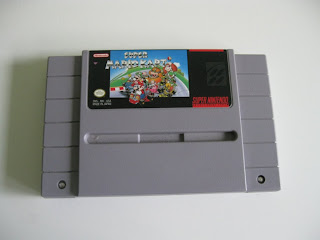 The original, still one of the best.
Super Mario Kart was the first game in the long-running commercial juggernaut Mario Kart series.  Credited with creating the "Kart Racing" genre, several brands and companies have tried to copy the formula and failed.

Oddly, though, the game wasn't designed with Mario in mind.  The original vision was to create a Mode 7 racer with split screen support, after the success of their fantastic but single-player only F-Zero.  A generic man in overalls originally populated the karts until two or three months in development when they decided to see how the karts looked with Mario in them.  With that, the Mario Kart series was born.

This copy of Mario Kart was actually purchased in a bundle pack - a SNES system, Super Mario World, Donkey Kong Country and Super Mario Kart.  $30 was a bit high for the set, but I figured I'd sell the system and the other two games on eBay and hopefully come out on top.

The auction went for $50, so this copy of Mario Kart was free, and I even made a profit.  I'm loving this buying/selling game.
Posted by Jerry at 7:36 AM