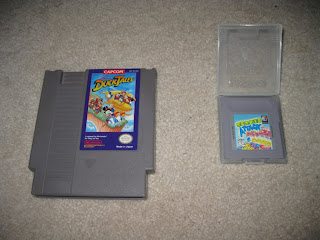 DuckTales is the first in Capcom's line of awesome Disney games, and is thought by many to be the best.  I haven't played it as yet, so the jury's out on that one.  Tetris Attack is, of course, another Americanization of a Panel de Pon game.  Both are fine additions to the collection at $2.99 each. This may have been a bit much to spend on Tetris Attack, as it turns out, but the value of the DuckTales makes up for it.

Besides, my love for the Panel de Pon series of games has no price tag.  Once I've gotten my hands on Pokemon Puzzle Challenge, I'll have 'caught them all' - all of the US-released classic Panel de Pon games.  Then, on to the Japanese releases!  Fairies and flowers and magic pixie dust, here we come!

...ahem...  In other news, you may have noticed that I've slowed considerably on gaming purchases.  Next weekend is the Portland Retro Gaming Expo, and I'm ready for it.  I've been saving up money and practicing for the NWC tournament.

What is the Portland Retro Gaming Expo?  After the jump, read their press release.

August 30, 2011 - Portland, Ore. - The sixth-annual Portland Retro Gaming Expo (PRGE) will be
held at a new location in 2011: the Doubletree Hotel in Portland’s Lloyd District. The new venue will
allow the Expo to accommodate several enhancements including more space in common areas and a
greatly expanded freeplay arcade. The Doubletree location also offers closer proximity to public
transportation and restaurants.

PRGE is a convention attracting fans of video games and their history. It is made up of three areas: The
Freeplay Arcade, the Theater and the Vendor Marketplace.

The Freeplay Arcade allows attendees to play 30 full-size arcade games, 6 pinball machines and over
40 home video game consoles including classic like the Atari 2600, Nintendo Entertainment System
and the Sega Genesis. All games are free to play with paid admission.

The Theater is a venue within the Expo hall where attendees can see a number of speakers and panels.
The Expo keynote will include Thor Aackerlund and Robin Mihara, the first- and third-place winners
of the 1990 Nintendo World Championships.

The Vendor Marketplace is by far the largest and most popular part of the convention. It will host over
35 vendors selling everything from classic video game consoles to gaming-related crafts and homebrew
video games.

At 17,000 square feet, the exhibit hall at the Doubletree will double the size of last year's Expo. This
will allow more breathing room for vendors and attendees and, unlike last year, the event will take
place in one large hall instead of being spread across multiple smaller rooms. Additional enhancements
in 2011 include a live DJ, a larger theater and an expanded roster of speakers and entertainers.

“The Expo will be twice the size it was last year. We've grown from 250 people in 2006 to over 1,200
people in 2010. Our expansion in 2011 is mainly a response to the growth in interest and attendance
we've seen in the last few years.” says Chuck Van Pelt, one of the organizers of the PRGE.

“We listen to what our attendees say after each event and roll those suggestions into the next Expo. For
example, our Vendor Marketplace has always been the most popular part of the show and has been
expanded to over 35 unique exhibitors this year. ”

For tickets or information on the Portland Retro Gaming Expo, visit RetroGamingExpo.com.

Retro Gaming Expo, Inc. is a Portland, Oregon-based 501(c)4 non-profit cooperative organization
dedicated to creating awareness of, and appreciation for classic video and arcade games through the
presentation of events and conventions that celebrate the historic contribution video games have made
and continue to make in popular culture.

Sound awesome?  Yes, it is.  For Fami-Complex, it's the event of the year.  And yes, I'll be writing about it here.  I don't yet have a camcorder, though, so there won't be any FamiComplex TV coverage.  Sorry.

Questions or comments?  Leave them below!
Posted by Jerry at 8:24 AM