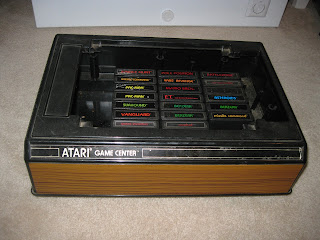 Today's Goodwill finds actually come from of Goodwill's auction site, http://www.shopgoodwill.com.    Goodwill's auctions can be another great source for bulk retro items - but there are a few caveats.  First, it's become quite well known, so don't expect a super-rare game to go for a low price.  Second, the shipping tends to be atrocious, so watch it carefully.  The best course of action, in my opinion, is to watch for local auctions, because that means you can pick it up locally for a much smaller handling fee.

This is an Atari Game Center, a wood grained thing of beauty designed to store your Atari cartridges and peripherals, with a set of grooves on top which snugly fit your console.  Included with the game center are all of the cartridges you see inside, as well as a stack of manuals and inserts! 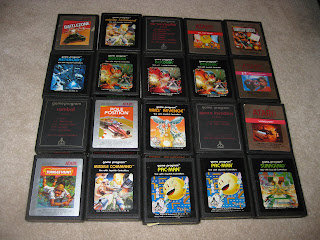 I love this stuff.

The games are Battlezone, Air-Sea Battle, Ms. Pac-Man, Mario Bros., Asteroids, E.T., Combat, Pole Position, Yar's Revenge, Space Invaders, Vanguard, Jungle Hunt, Surround, 2 copies of Missile Command, 2 copies of Pac-Man, and 3 copies of Berzerk.  There are manuals for most of the games... as well as a few manuals for games that aren't here.  Odd, but cool.  Oh, and there's a comic book for Yar's Revenge!  ...maybe it'll help that game make some sense.  This whole set was only $11, which was a really great deal for everything included.

The pickup location for this was the Goodwill Outlet in Hillsboro, so I stopped in to take a look.  The Goodwill Outlet is affectionately known as "The Bins" because, well, that's exactly what it is.  It's a large store that's simply filled with huge plastic bins.  Your role is to tear through all of the junk (and really, a lot of it is junk) in order to find a gem or two to take home.

The great part about The Bins is that they don't charge per item, they charge per pound.  It's the end of the line for this stuff, so they're less interested in profiting off the items themselves and more interested in getting rid of the bulk that the stores couldn't move.  You will have to dig, but you're almost guaranteed to find something half decent, and at a per-pound price, there's never any reason to leave anything behind. 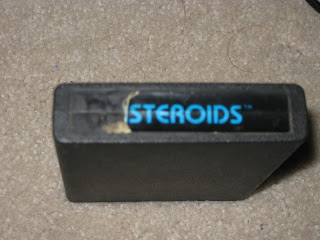 
I found a copy of Steroids for the Atari 2600.  I thought that game was banned? 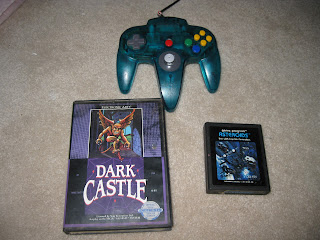 
For $1.59, I picked up the notoriously awful Dark Castle for the Sega Genesis, a N64 controller in much better shape than the last few I picked up there, and... oh, it's a copy of Asteroids.  That makes much more sense.

Again, at that price, why leave anything behind?  Of course, I hadn't realized there was a copy of Asteroids in the lot I'd just picked up, but oh well.  Still a great day for deals.

Yard sale season is winding down, so hit those local thrifts, before someone else beats you to it.  And, most of all, have fun!
Posted by Jerry at 8:43 PM