I Do Still Hunt, I Swear. 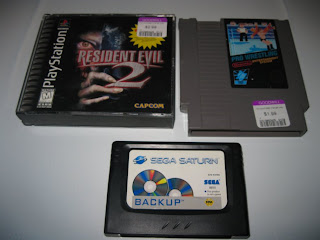 Let's start off by repeating what was already said in the video - Fami-complex is a year old as of yesterday!  It's hard to believe it has already been a year.  So much has happened in so little time!

I'm sorry about the lack of content lately, aside from the regular review episodes.  I haven't had access to my car regularly, which means I haven't been taking my regular thrifting trips.  As a result, of course, I have less pickups and less new acquisitions to talk about.

But, I will, of course, update when I'm able to make it out.

The best deal, however, came from last weekend, when I hit up a new and unfamiliar Value Village, finding a Sega Saturn backup cartridge for just $2!  The official cartridge generally sells for around $50, so this is a steal.

Oddly enough, I'm most excited about Pro Wrestling, common and cheap as it is.  It's one of those games I played a ton as a kid and haven't touched since.  I always played as Starman. 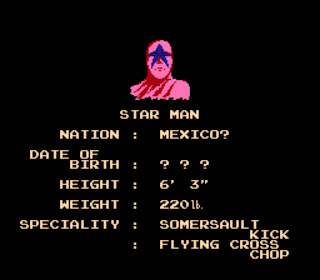 I mean, just look at him.  So calm.  So mysterious.  Is he from Mexico?  What is his date of birth?  Did he accidentally throw his white costume in the washer with his red towels?  The world will never know.
Posted by Jerry at 6:42 PM