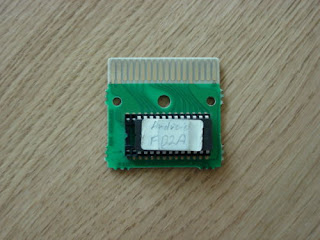 Now there's something you don't see every day.

Here's an interesting little piece of video game history that's shown up on eBay - one of two Vectrex cartridges used in the 1982 movie "Android" to generate the vector effects.  In the film, they used actual Vectrex units built into a "control panel" to simulate the look of high-tech computer displays.  For a low-budget film, this was a pretty great way to cut corners on effects, and actually looked pretty good, to boot.  Not that the film was any good, mind you... it certainly was not.

More information about the movie and the Vectrex's starring role can be found here, and the auction in question can be found here.  If you're interested - well, this isn't something you're ever likely to see again.  Happy bidding, super-collectors!
Posted by Jerry at 8:06 PM