It was bound to happen eventually, right?  Today I finally took the chance to go out and hit up my favorite thrifting haunts, and while it's not all top-shelf stuff, I feel pretty good getting back in the game. 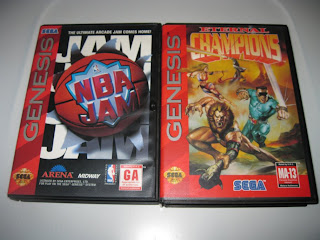 First off, two complete Genesis games, NBA Jam and Eternal Champions for $2.99 each.  I overpaid by quite a lot on both of these super-common titles, but y'know what?  That's fine, sometimes.  Especially when you've been out of the game for a while. 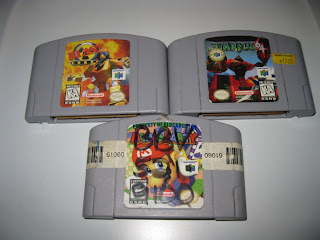 My N64 collection's starting to get somewhere.

Next, three N64 titles at $2.99 each - Blast Corps, Star Fox 64 and Mario Party.  Blast Corps is worth just slightly more than I paid, but with Star Fox 64 worth around $10 and Mario Party at around $19, they really made this trip.  See that Mario Party label, though?  It's covered by the single most vile, horrible and evil thing ever conceived by man - Blockbuster's security stickers.

These stickers are designed so that if you try to remove them, they will literally rip the game's label right off the cartridge.  There's no way to remove them without destroying the label, and this one's got permanent marker all over it.   It just had to be on the biggest prize of the day, didn't it?

There's one of these on my Pokemon Puzzle League, too.  If I ever meet the person who invented these, I'll... have strong words for him. 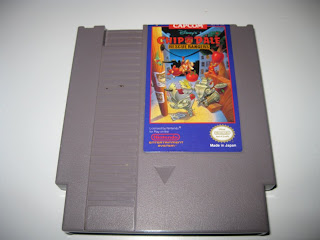 Chip 'n Dale Rescue Rangers for the NES, $4.99 at Value Village.  This one's also just under the estimated value, but that's okay.  It's Chip 'n Dale.

If you're not excited by this, you're clearly not a part of my generation. 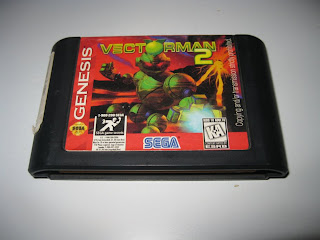 Vectorman 2 for the Genesis for $1.99 at my local Goodwill.  It's worth about what I paid for it, but if I remember correctly, these were pretty good games.  Now I just need to find the first. 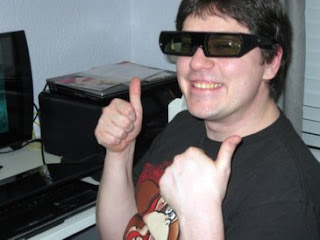 There is no way to look cool in 3D glasses.

So, where have I been?  Aside from the the fact that I don't have access to my car as often as I'd like, I've also dropped around $1300 on building a new killer gaming PC, with a Playstation 3D Display as the monitor.  It's a thing of great beauty, and has kept me occupied for a few days now.

Yeah, the real-world Jerry does play modern games.  Not that guy in the videos, though.  He's been stuck in a time loop since 1999.

Talk to him about the Playstation 3, and he'll tell you, "Yeah, I DO have three Playstations."
Posted by Jerry at 4:46 PM