At Last, I Finally Have A Famicom.

Sometimes, I don't save my pennies and jump on the best deal available. Sometimes, I want something, and I want it right now.  Sometimes, you name your site after something and don't actually own it.

All this overtime I've been working at my day job - coupled with the research I did for an article on the subject - led me to decide that it was finally time for me to have a Famicom.

So, rather than grab a cheap, beat up console with no AC adapter and a third-party RF switch, I decided to go all out for the real deal. 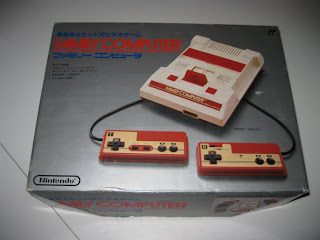 Hello there, you beautiful piece of history.


A boxed Family Computer, missing only the manuals and inserts.  The box is in fairly great condition when you consider that it's probably from 1983-1985.  It is nearing its thirties, you'd think it'd be in as bad of shape as I am. 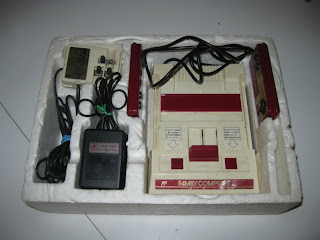 This is the most exciting thing I've seen all year. No, really.

The box contains the system and an original RF switch and AC adapter.  I haven't been seriously looking for very long, but nearly every one I've found has one or both of these replaced with a Hori third-party equivalent. 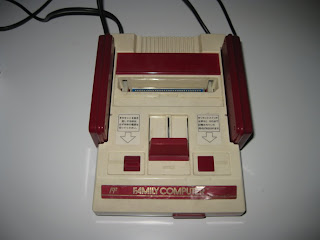 
It'll need some cleaning to get that white look back - it's old and quite dirty.  The original protective film is still over the front label, but as you can see, it's starting to peel off.

I'm sure she'll clean up beautifully.
Posted by Jerry at 3:36 PM