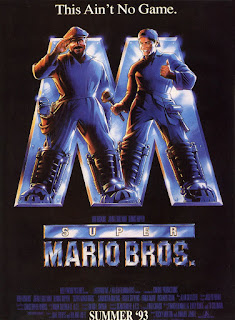 Yes, the game it certainly ain't.

FamiComplex takes another break from game reviews to review one of the controversial films in human history.

But, but... only one video this month?  Well, it's almost twenty minutes long, so there!  Block out some time in your schedule, sit back and enjoy!


EDIT:  This review got the attention of the Super Mario Bros. The Movie Archive, who've sent a response clearing some things up.

Nice to hear from you. We appreciate you being so forthright in responding to us in regards to the film. Considering how controversial the film is within both the gaming and film communities it's always a relief when people are open-minded to discussion on it.

While we enjoyed the review and felt it to be fairly extensive, there were still several points you raised that were not entirely accurate or fair. Those points don't particularly contribute towards either enjoying or disliking the film, but they're still worth commenting on if only to make things more clear.

Firstly, Mario and Luigi are brothers. While the double-date scene may seem to indicate that Mario adopted Luigi or that Luigi was adopted into Mario's family that really wasn't the implication. According to writer Parker Bennett in an interview we conducted, Luigi was simply a much younger brother who Mario had to raise once their parents died in an accident. He said:

"[...]what we decided is, “Okay, Mario has a big chip on his shoulder about being a plumber. He’s inherited his dad’s business [and] it’s not what he wants to do;” it’s sort of a “It’s A Wonderful Life” thing with Jimmy Stewart at the bank when he wants to be traveling the world.
[Mario’s] dad and mom died and then he’s forced to look after Luigi and so he’s stuck with all this responsibility that he never asked for."

This was, of course, much more clear in the early scripts, particularly their initial draft which focused on their relationship much more.

Secondly, the dino-humans actually do have "cave drawings" depicting the split of the dimensions, so it is entirely feasible that they would know this as part of their history. For the most part it is largely considered as more of a legend or even a creation myth, people like Toad are more aware of the truth behind it.

The rationale behind this is that a sect of people heavily mutated by the meteorite's radiation guarded the portal between worlds as well as studied ours to better preserve their own. This group of "Portal-Keepers" ruled the dino society, but were overthrown by Koopa. Only Daisy's mother and Daisy survived. This was all left unstated in the film, of course, but was very much a subplot within the early scripts that explained just why Daisy was capable of withstanding the power of the dimensions.

The King being de-evolved into fungus was not meant to imply that dinosaurs evolved into fungus so much as that fungus is a baser stage in life. The scripts state that it is not so much fungus as a sort of sentient primordial "slime." The scripts also make a point that the de-evolution technology is not truly "de-evolving" organisms; rather, it is mutating them into creatures reminiscent of their genetic ancestry. Hence, why Koopa doesn't turn into a true T. rex.

Finally, the sequel  will happen at some point... just not as a film. After nearly 20 years and growing cult status, the adventure is planned to be continued in a series of comics. Should be cool.

Anyways, glad to see you so open to this response. Hopefully this rather long message clarifies several of your points and helps you understand what they were doing with the story a little more, even if you still won't fully enjoy it. I look forward to hearing back from you.
- Sincerely,

The site, at http://www.smbmovie.com, has a ton of videos, images and information about the production of this movie that shine a light on why it came out the way it did, and is an excellent counterbalance to my highly negative review.  Getting such a polite and well-written response makes me regret not having given the movie a fair shake - after all, I set out to tear it apart, and that's exactly what I did.

So, enjoy my review for the comedic value, then go check out the archive for more information!
Posted by Jerry at 11:10 AM