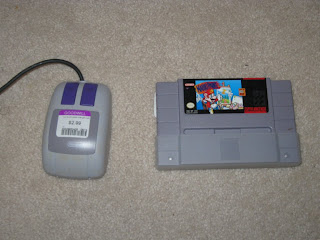 16-bit music with animal noises?  Sign me up!
There's not much to be said about Mario Paint

that isn't common knowledge.  Gamers and non-gamers alike are familiar with its music, animation and drawing tools - or at least their end result.  Videos from the Mario Paint composer are all over YouTube; the early intro to Homestar Runner was composed in Mario Paint.  Despite having been massively popular, it has become uncommon to find a copy with the SNES Mouse

included - and sadly, the mouse is required.

Two versions of the game were released for the Satellaview service in Japan that supported a standard Super Famicom controller, but like most Satellaview products, this never made it to the US.

Firstly, the first time I went in, I saw that the game was there, but no mouse was included.  Without the mouse, the game is hardly worth picking up unless you already have one.  The following day, however, there it was.  The key here is that if there's a complete system and a stack of games, chances are they've donated their entire collection.  So if there's a game that requires a special peripheral, wait for it and it'll probably turn up, as Goodwill doesn't set out all of their games at any given time to keep stock moving.

Secondly, don't just look in the game section.  There are consoles that, on first glance, look like DVD players (like the CD-i), and there are consoles that look like wide tray CD changers (like the LaserActive).  Always look closely.  The reason this is relevant is that Goodwill employees don't generally collect video games, otherwise they'd probably be buying everything out before we even get to see it.  The mouse was found in the computer section, tossed in with a group of PC mice.

Happy hunting!
Posted by Jerry at 7:11 AM