You Can Not Has: Games You'll Never See - Part 3 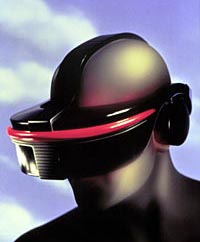 That is some badass headgear, right there.
In 1991, Sega was doing quite well financially, due to the worldwide success of the Mega Drive/Genesis console.  As a result, they were working, as they often did, on new technology and control schemes to change the face of gaming.

When Sega announced their Sega VR headset, gamers were excited.  After all, "Virtual Reality" was just starting to gain steam, and everybody wanted a piece of it, though Sega was the only company poised to make it an actual reality.

It was an IDEO virtual reality headset with LED screens inside and stereo headphones.  Sensors were also installed to allow the headset to track your head's movement, moving the environment with your head's position.

The headset was originally targeted for a 1994 release, but never made it out of the prototype phase.  Sega claims that development as stopped because the effect was so realistic that people would move around and injure themselves while gaming.  Having seen people injure themselves flailing around with Kinect games, I might actually believe this story.

The more widely accepted version, however, is that test users complained of headaches and motion sickness. This is also believable for anyone who's tried the 3DS or Virtual Boy for more than five minutes.

Reportedly it was a last-minute decision - Alpha Bits cereal even had an instant win game with this as the grand prize, as seen here:

I'd have loved to own one of these, headaches and all.
Posted by Jerry at 8:32 AM