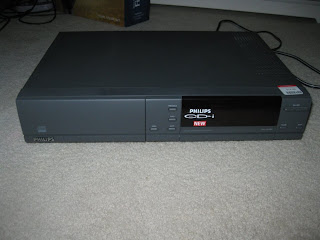 The CD-i. It's NEW, according to the sticker.
Speak of the devil.  In my last post, referring to the SNES mouse, I mentioned that devices like the CD-i are likely pop up in the wrong section, because employees don't know what they are.

Less than a week later, one appeared, stacked on top of a DVD player in the electronics section.  Before
I talk about this one, let's talk about the CD-i.

The CD-i, or Compact Disc Interactive, is an "interactive multimedia player" released by Philips in 1991.  This thing plays just about anything that could be pressed on a CD.  Audio CDs, CD+G (Karaoke discs), even Video CD with the "Digital Video Card" add-on.

The CD-i saw movie releases, interactive audio CDs, encyclopedias and video games - really, if it was coming out for a CD-ROM equipped PC in 1991, you could probably find it here.

The games consisted almost completely of FMV games, though no Digital Pictures titles made it to this platform.  In addition to these, there were board games, game shows, educational titles - and Zelda games.

Yeah, you read that right.  The short version of the story is that Philips was one of the companies that Nintendo partnered with during their attempts to make a CD add-on for the SNES.  Of course, you know by now what happened to their partnership with Sony - but this partnership ended with Philips holding the rights to some of Nintendo's characters - which resulted in some of the worst games of all time.  Two Zelda games and one Mario game exist for this system - not developed by Nintendo.

It was a commercial failure, though, and was discontinued in 1998.  To this day, however, the CD-i has a devoted cult following, as well as a homebrew community still churning out software for the thing.

My CD-i ran $15 at Goodwill, and includes the Digital Video Card add-on.  No remote or controllers could be found, but I'll be returning every day until one pops up - chances are, it was donated with one, and this may be the only way I'll find one for a decent price.  They go for $50 and up on eBay, and that's a bit high for my tastes.

Expect an update here if I come across one.
Posted by Jerry at 6:43 AM