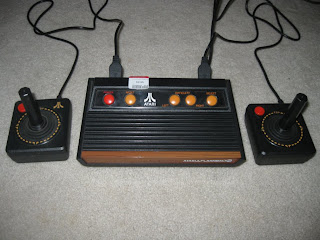 Actually a lot cooler than I expected.

Normally, I have a strict anti-clone policy when it comes to my collection - and by extension - this blog.  So the prospect of owning an Atari Flashback

never really appealed to me.  After all, plug and play games and clone consoles are almost always sad shadows of their original hardware.  When I saw this system at Goodwill, I passed on it.  And passed.  And passed.

When the tag color of the week changed, I revisted.  Sadly, this was not on sale, but it got me thinking.  The joysticks had the original connectors, and they looked pretty nice, so I went home and did a bit of research.

I found that, yes, the joysticks are directly compatible with the original 2600, and $9.99 for two joysticks of this quality is pretty good, even for knockoffs.  And, of course, I needed some for the 2600 I picked up and cleaned up a while back.  So, I snapped it up.

After using the joysticks, I can't even call them knockoffs in good conscience.  These are full-on reproductions, slightly different in appearance, but they feel fantastic.  The console itself was the biggest shock - to my eyes and ears, the colors and sounds are perfect.  Everything is dead-on.

So, I did some more research.  As it turns out, this is not your average NOAC (Nintendo on a Chip) Atari knockoff.  This is a researched, revamped modernization of the hardware in the original Atari 2600.  All it's missing are a some undocumented opcodes - but, of course, anything that wouldn't work isn't included.  The games that are there are just perfect - as soon as I get some of their cartridge-based counterparts I'll put together a comparison video.

Bootleg knockoffs of this system are out there in the wild as well, so keep an eye out.  That said, if you can track down an original, it's worth a look.
Posted by Jerry at 8:14 PM