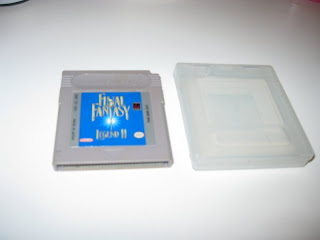 Finally, something to play on my Super Game Boy.
When you think back on Square's 8-bit legacy, it's easy to forget that a total of four games were released on the Game Boy, all of which were labeled as Final Fantasy games, but none of which were part of the series proper.

Final Fantasy Legend I-III are actually the first three titles in the SaGa series, followed up by Romancing SaGa games on the Super Famicom and the Saga Frontier games on the Playstation.  At the time, Square was a household name in Japan, and a serious and focused contender in the RPG scene.  In the US, however, the only Square games we'd ever seen were King's Knight, the Rad Racer series, 3D World Runner, and Final Fantasy.  It's easy to see why they latched on to the Final Fantasy name here in order to sell cartridges.

was found at Goodwill for $2.99, hiding under some PC games that had been haphazardly tossed about.  It needs a bit of cleaning, but the cartridge and save battery are working as they should.
Posted by Jerry at 6:07 AM