It occurs to me that many of you may not know exactly what the 32X is.  Let's get that cleared up, shall we?  I'll let Sega's advertising team tell you about it.
Wait, what?  Let's try that again:


...what the fuck was that?  Sign of the times, or ad executives on cocaine?  I'll let you decide.

What the above videos were trying to say is that the 32X was a 32-bit expansion for the 16-bit Sega Genesis.  In January of 1994, the aging Sega Genesis and SegaCD needed a boost.  Nintendo's Super Nintendo was stomping them, and it was time to begin work on a 32-bit console to crush the competition.

This new 32-bit console was targeted for the holiday season in 1994, less than 11 months development time.

Codenamed "Jupiter", it was to be a cartridge-based replacement for the Genesis.  In development, it was decided that CD technology was cheaper, so the project was modified, and Project "Saturn" was born.

The decision was then made to extend the existing Genesis console with a higher color depth and a 32-bit processor.  This new console was to be codenamed Project "Mars" and was released in November of 1994 as the 32X. 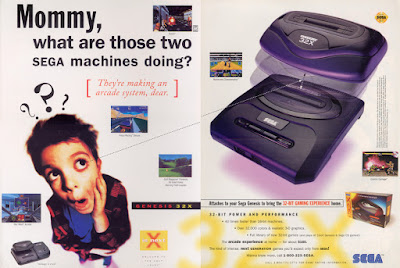 Holy crap, Sega.
The 32X was an absolute failure, despite Sega's best attempts to push it as the next big thing.  There were several reasons - the price was far too high for an add-on ($170), some launch titles were rushed so badly they were either awful or not much of an improvement over the Genesis - but Sega's largest detractor was Sega themselves.

The Sega Saturn was slated for release in September of 1995, positioned as Sega's "true" 32-bit console.  Why buy an expansion for your Genesis when the real next big thing is just around the corner?  The final nail in the coffin was the Saturn's surprise release in May of 1995, rendering the 32X obsolete in just 6 months.

The 32X is considered one of a string of bad decisions leading up to Sega's demise in the console market.