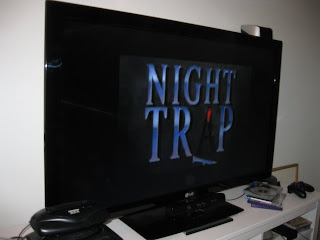 Despite the destruction of my Model 2 CD, I'm still mostly in business.  I'm able to use all three systems, and if you're a Model 2 Genesis user without a 32X patch cable, you'll want to pay attention. 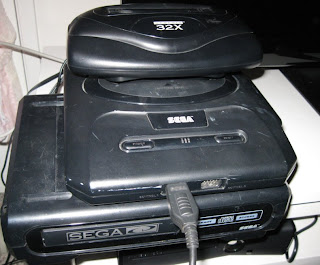 The current setup: workable, but not recommended.

Above, we have a Model 2 Genesis and 32X plugged into a Model 1 Sega CD.  Not only is this setup ugly and lopsided, it's also unstable.  As you can see, there is no spacer between the 32X and Genesis, and the Genesis does not connect evenly to the Sega CD.  In other words, this will work, but if your kid, cat or dog decides to run across the floor, or hell, if the wind blows through the window too close to it, your game will freeze. 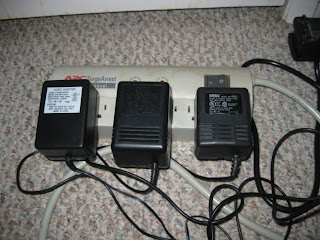 The power company loves me.

Even when set up correctly, it's a power hog.  3 separate AC adapters, one for each component - could this not have been just a little more efficient?

The adapter pictured at left is the replacement I ordered for the 32X.  I was promised an "authentic, original" Sega-branded adapter, and what I got was this generic garbage that doesn't even work with the 32X.  Works with the Genesis, so I just had to swap them out. Maddening, but I'll live.

In addition, my composite AV cable arrived, so no more RF ugliness.

The most important component, however, is the patch cable.  This was a proprietary cable that connected the 32X to the Genesis, and is absolutely required.  They go for $15-$30 on eBay and just about everywhere else on the internet.  The one pictured above works beautifully, and can be had for less than $10.  It can be ordered from here.

Note: I am not a shill for StockCable.com.  I get nothing from posting this here other than the satisfaction that you didn't get ripped off buying a 32X cable on eBay.  Enjoy!
Posted by Jerry at 7:22 AM