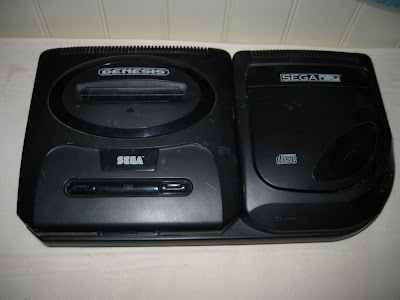 Acquired at last year's Portland Retro Gaming Expo, this set ran me $40, and came with two controllers, both A/C adapters and (eww) an RF adapter.  It'll need some cleaning, but otherwise it's great.

Upon trying to start it up, I learned a very important lesson about an untested SegaCD: always test it with a CD-R first.  On first attempt, the drive would not recognize a game disc and cranked out this hideous, holy-shit-I-broke-it kind of scraping noise.  I tried again, same result.  Pulling it out, I was greeted by a deep, circular scratch cut into the surface of the disc.

The Genesis sometimes refuses to power up, but if you wiggle the AC plug around in the jack, it'll usually start.  After years of disuse, the solder joints from the jack to the PCB may weaken and break; this is a common issue with the Model 2 Genesis.

More on this set later - I'll document any repairs here.