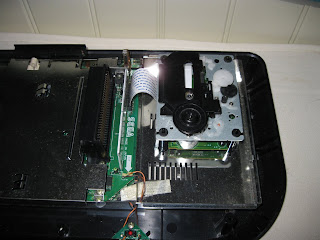 This is what the Sega CD Model 2's innards look like.  Not much to it, really.
As I mentioned before, my Sega CD Model 2 has a little problem with authority.  It's an issue of perception, really.  I think that discs should be treated with care, played gently, and returned to the case.  It thinks that they should have deep grooves cut into them.

Rather than agree to disagree, I set out to correct this issue. 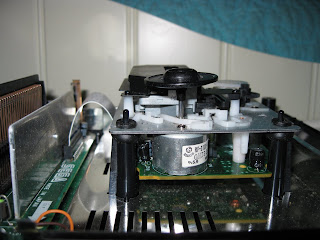 That is seriously sideways. I'm surprised this thing played discs at all.
The photo above shows just how bad the spindle's alignment was.  Why so bad, you ask?  Apparently it was on its last legs. 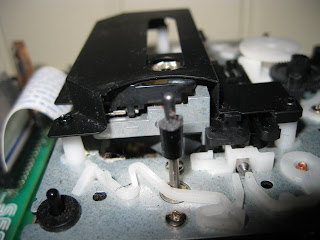 Oh shit!
Weakened by time, rough treatment in a previous life?  Who knows - all I can say for certain is that it snapped right off when I tried to realign it.

The spindle motor looks easy to remove and replace, but sadly these parts aren't as common as they once were.  The best option right now is probably to gut an old portable CD player from Goodwill and steal its spindle for our purposes here.  More on that when I get a chance to track down the parts.

Also, as it turns out, the power connection to the mainboard is fine - it's the AC adapter that's faulty.  Guess I'll need to buy yet another.
Posted by Jerry at 6:24 AM