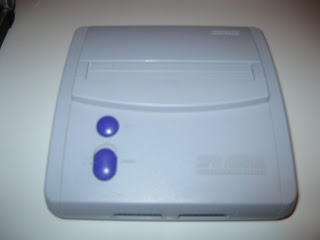 The SNS-101, also known as the "SNES Mini", "SNES Jr" or "SNES 2" was Nintendo's second generation Super Nintendo console, redesigned to be smaller and lighter than the original release.  It was released in 1997, after the release of the Nintendo 64 and Playstation, as a low cost alternative to these higher-end systems.

The redesign dropped a few things most casual users wouldn't notice.  The RF port is gone, but by this time very few people were still using them.  The expansion port is also missing, but that was unused in the US.  It was used in Japan for the Satellaview add-on, and would have been used for the Super Nintendo CD add-on, if deals with Sony and Panasonic hadn't fallen through.  As a side note - this is how the Playstation was conceived, as well as Panasonic's absolutely terrible Nintendo-licensed CD-i titles.

Mine was purchased over Amazon for $40.  It included a third-party AC adapter which I'll be replacing with the real deal, an RF switch that this system can't use anyway, and a bootleg controller. 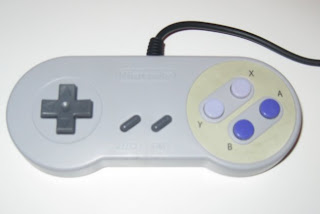 ...something isn't right, here.
Originally packaged with the SNS-101 were newly redesigned controllers, designated SNS-102.  The Nintendo logo was now embossed rather than silkscreened and the buttons were darker to provide more contrast.  This is not that controller.

So what is it?  A fake.  It feels cheap, like the plastic would snap if you applied too much pressure.  The color of the sticker around the buttons is completely wrong no matter which revision.  The buttons are also extremely clicky, and the D-Pad just feels weird.  The logo on the back, as well, looks like it was recreated with the wrong font.  A nice try, but it's not fooling anyone.

That got me thinking, though... is this console an original?  There are bootlegged SNS-101 consoles that appear to be exactly the same as the official version.

Some very helpful information can be found here to determine whether you've got an official Nintendo SNS-101 or a bootleg.

After going over and over the system, I'm convinced it's the real deal.  There are no build quality issues, the "Gamebit" screws are used, and all of the stickers and labels look exactly as they should.  My guess is that the original controller was lost along with the AC adapter, and the seller went to eBay for replacements.  eBay is apparently full of these pirate SNES controllers, so it's not a stretch.

I'm just happy the system is real - the rest can be replaced cheaply enough.