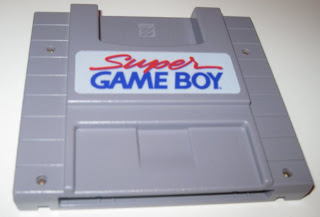 The Super Game Boy was released in 1994, allowing you to play your Game Boy games on your SNES console, and 32 built-in color palettes added color to otherwise monochromatic Game Boy titles.  In addition, several of the more popular games had pre-configured color palettes and borders, such as Metroid II and Legend of Zelda: Link's Awakening.  The Super Game Boy was released prior to the Game Boy Color, and, as such, will not play Game Boy Color exclusive titles.

Mine ran around $6.50 shipped from Amazon.com, and is in great condition, but I don't currently have any Game Boy games on hand to try it out.