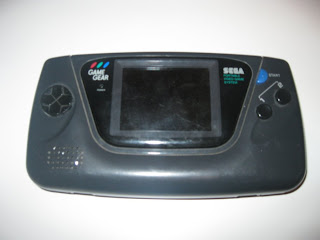 In great shape, for a Game Gear.
6 AA batteries and a unit that won't fit in your pocket unless you wear very, very large pants.  This was the portable gaming arena in 1991, and the Game Gear was on the bleeding edge of technology.
This is essentially a miniaturized Master System with a lower output resolution and a much larger color palette.    The two pieces of hardware are so similar, in fact, that Sega also released a cartridge adapter that would allow you to play your Master System library on the go.  Of course, the lower resolution meant anything with small sprites (like bullets) wouldn't display properly, so you'd often take damage and have no idea why.
Sega's advertising campaign centered around one concept - color is better than monochrome.  They mocked Nintendo with every revision of the Game Boy, essentially calling it a system for colorblind idiots, as seen above.  Regardless of their aggressive and scathing advertising techniques, the Game Gear was successful, but was never able to dethrone Nintendo's Game Boy.  This was likely due in part to the lack of third-party titles, though some heavy hitters like Mortal Kombat did make it out. 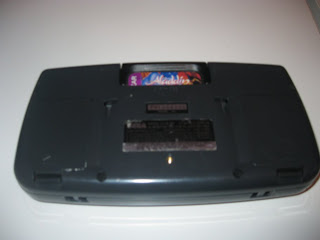 Ooh, free game!
On to my new Game Gear.  This was a birthday present from my awesome wife.  It included no AC adapter, but uses Sega's 2103, the same adapter used in the Genesis Model 2 and 32X.  The system is in great shape, considering the quality I've seen in some of these.  Relatively unscratched screen, both battery covers still attached, and it even came with a copy of Aladdin stuck in it. 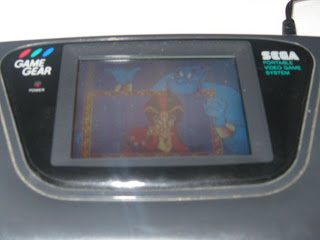 Note the angle from which this picture was taken.
There is one issue, however, and it's one that plagues these systems.  At the time these systems were manufactured, there was an industry-wide capacitor crap-out.  Every capacitor in every release of this system is lousy, and if your screen is still 100% perfect, you're either a liar or extremely lucky.  It'll screw up tomorrow.
When I first turned it on, I noticed brightness and contrast issues that couldn't be resolved with the contrast wheel.  The color bleed is atrocious and sprites are sometimes indiscernible from their backgrounds.
I turned it on today, and a capacitor has apparently now blown - the screen can now only be seen when tilting the system far forward, as pictured above.  It's a hard system to photograph, but you can see the issues to an extent.
I'll be cleaning and restoring this system, along with new capacitors all around.  Stay tuned.
Posted by Jerry at 8:40 AM