You Can Not Has: Games You'll Never See - Part 1 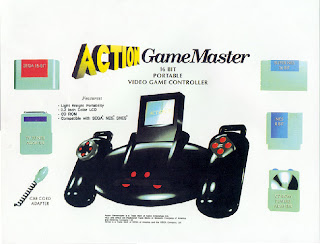 The Action GameMaster.
Active Enterprises was a tenacious little game company back in the early 1990s.  The company is best known for their awful unlicensed Action 52 cartridges, as well as the "Cheetahmen" franchise they just couldn't let go of.

This was to be their most ambitious project, the Action GameMaster.  The claim is that this portable device, which looks roughly the size of a modern laptop computer, would be able to play Sega Genesis, NES and SNES cartridges, as well as a CD-ROM add-on, which presumably would allow for Sega CD games as well.  Of course, they'd be releasing their own first party titles as well - Cheetahmen III was meant to be a flagship title.

I can hear your groans from here.

It's not hard to tell why this system never made it to market.  It had a projected retail price of $500, and that's just the system.  This entry price would give you access to one title at launch - the elusive Cheetahmen III.  I know you're salivating at the thought.  In order to play your NES, SNES, Genesis and CD titles, you'd need additional cartridge adapters, each sold separately.  These "adapters" were to be essentially miniaturized versions of the consoles themselves - this is the only way this would have been possible at the time.  With that in mind - this would have been one hell of an investment.

But this, of course, was all theory - by the time Active Enterprises went out of business in 1994, no actual work had been done on the Action GameMaster.  I weep to think of the horribly coded side-scrolling garbage I never got to play.
Posted by Jerry at 6:29 AM

Email ThisBlogThis!Share to TwitterShare to FacebookShare to Pinterest
Labels: Genesis, NES, SNES, You Can Not Has