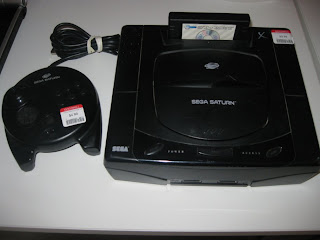 Hello there, you gigantic, heavy pile of plastic.
The Sega Saturn was released in May of 1995, taking North America completely by surprise, but not in a good way.  The announced release date was to be September 2, 1995, a ruse to cause Sony's PlayStation to release 4 months later.

This surprise launch caused more trouble than it was worth - very few games were ready, as third party developers were shooting for a September release, and as the price point of $400 was announced, Sony was there to announce they'd be undercutting them by $100.

By the time the PlayStation finally released, Sega had sold around 80,000 Saturns, with Sony selling over 100,000 PlayStations in their first day.

This lead continued and Saturn trailed behind the Nintendo 64 and PlayStation, only seeing spikes in sales when new arcade ports were released.

My Saturn was yet another $15 Goodwill marvel.  The base unit with power and video cables was marked at $9.99, and each controller (they had 3 of them) was marked at $4.99.  Since I was only able to grab one, I went for the 3D controller pictured above.  This is the only Saturn controller with an analog input, designed for playing Nights Into Dreams.  In the hierarchy of Saturn Controllers, this rates a bit higher in my book than the normal pads. 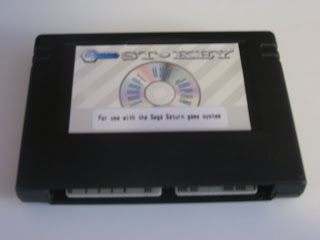 Score!
Also, stuck in the cartridge slot (and thus included in the price) was this ST-Key.  These cartridges normally run around $20 and allow you to use Japanese and European Saturn games in your US Saturn, and vice versa.  Helpful, because some of the best stuff for this system was only ever released in Japan.

In my research, I'm finding that nearly every game for this system is uncommon, and I am kicking myself for not picking up that mint complete copy of X-Men: Children of the Atom that was also on the rack for $4.99.  $4.99 for an awesome game that Rarityguide estimates at $40.  But alas, I was broke, and the hardware alone put me over budget.

The system needs a good cleaning.  Also, it will not hold the date entered and all save games from the previous owner have been wiped clean, so it seems that the save battery needs to be replaced.  More information and a guide will follow as I get this part replaced.