You Can Not Has: Games You'll Never See - Part 2 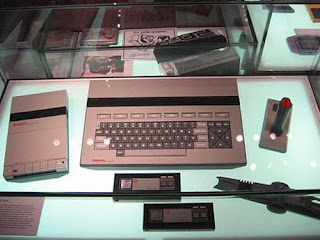 So cool looking.
This gem actually evolved into something you and I know well - the NES.  Nintendo's Advanced Video System was their first protoype of the US version of Japan's Family Computer, or Famicom.  As you can see, it was originally supposed to use a cassette tape drive, like that of the Commodore 64 and Atari computers, as it was one of the computing standards at the time.  Thankfully, cartridges were employed in the final release, and Nintendo's shift in focus from the home computer market to the home gaming market dropped the keyboard and joystick, for better or worse.

I can't help but imagine an alternate universe where Nintendo became a successful computer company, only to be buried by PC and Mac the way Commodore was.
Posted by Jerry at 5:28 PM

Email ThisBlogThis!Share to TwitterShare to FacebookShare to Pinterest
Labels: NES, Nintendo, You Can Not Has